Boss in the Bedsheets is the story about Zelda – the fixer of everybody elses messes – and Ash – an overworked, micromanaging perfectionist who really needs his mess fixed. Zelda is running away from her old life. She’s determined to start over, make better choices and put herself first for once. On her getaway flight she ends up sitting next to Ash Santillian, an extraordinarliy hot and stressed out accountant who also happens to be a recipient of one of Zelda’s hastily sent out job applications. However, making better choices doesn’t include persuading Ash to hire her and then shack up with her new boss. 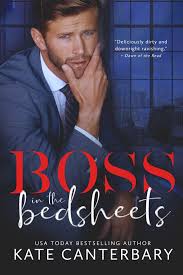 Both Zelda and Ash are two very hot messes, on the opposite ends of the mess-spectrum. But they fit together like two pieces of a puzzle. I loved how their instant connection was depicted. I’m generally not a fan of insta-love (unless there’s some kind of credible explanation *cough-fated-mates-cough*), but that’s not what happens at all. Canterbary manages brilliantly to describe that sense of ease and comfort you feel when you just click with someone. Ash’s and Zelda’s dance around each other is simply beautifully written.

This is a romance, yes, but it’s not of the silly, chick-lit variety that the title may imply. Boss in the Bedsheets is deeply introspective. Both Zelda and Ash are portrayed mainly through their soul-searching inner monologues, each more insightful and raw than the one before. It’s all the emotions – all the time – which left me with a feeling of being exposed and vulnerable. Not an entirely pleasant feeling that.

But I rushed through this read just so I’d finish before the release the 26th. And rush-reading this book is the worst possible way to enjoy it. Canterbary is a wordsmith of the very first order. Every analogy is scarily on point. Each paragraph deserves contemplation and pause. It’s not light fluff to race through to get to the happily ever after. The journey is very much the whole point in this case.

I’d say this book differs a fair amount from many of Canterbary’s earlier ones. The books about The Walshes and the Talbot’s Cove series are maybe not fluff, but there’s way more hilarious banter and less of the soul-searching. In Boss in the Bedsheets, the humor definitely takes a back-seat. Sure, it’s a love-story with hot, hot nooky, but it’s mostly a story about self-discovery and acceptance. It’s basically a coming-of-age story – but the adult version – disguised as a romance. And it’s so very, very worth your time.