Dirty English is the first installment in a duet. It’s a classic College romance story with a little bit of everything. A hot, built Brit. A young woman with a traumatic past. A catty ex-girlfriend. An insane and abusive ex-boyfriend. Strained parental relations. And a bit of shagging.

So, in other words, damn entertaining! 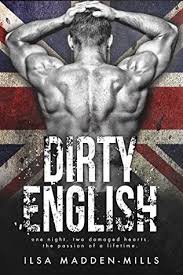 It’s the love story of Elizabeth Bennett (!), College student and artist, and Declan Blay, British underground fighter and lover of classic literature. Elizabeth, damaged and wary, is trying to put her past behind her and focus on her studies. She is determined to not fall in love or let any man near enough for him to hurt her. Instead, she only has one-night stands with guys she knows she won’t fall for. Only, then she meets Declan. A guy who is everything she’s sworn to stay away from. But Declan won’t accept her one-night rule.

I love American College romances. You get pubescent dramatics but with adult consequences. And Dirty English is precisely that. It has it all! It’s colorful, angsty and has hot encounters. And of course there’s the weird rich-poor dynamics that I have such trouble relating to but creates great conflict. But what I really have a hard time accepting is the description of a society where wealth and political pull makes you practically untouchable. Again, it’s great drama, but how close to the truth is it?

I enjoyed this story immensely. Not necessarily because it was the most original, well-written book I’ve ever read, but because the characters were truly intriguing and the story-telling was top notch. I just had to know what would happen next. And I wasn’t just rooting for the main characters. There were several secondary characters as well that pulled me in and had me wanting to learn more.

This is no award-winner, but it doesn’t matter in the least. It’s a story of young love, told in a way that had me binge-reading. In conclusion, a great way to spend a couple of hours.