Double Teamed is a train wreck. And that’s putting it mildly.

All I wanted was some juicy smut. Lots of explicit nooky and hot guys. I don’t think that’s too much to ask for. So a short story with an MMM ménage? Sign me up! But my god! This was crap straight through. Is it mean of me to be so blunt? Maybe. But this is another one of those books getting ridiculously inflated ratings on Amazon. I just want to save people from reading this disaster.

It’s a story about a guy named Adam who meets up with his old bestie from High School. A bestie he also had a major crush on but always assumed was straight. Only he’s not of course and Adam ends up in bed together with Blair the crush and his partner Logan. But the three lovebirds aren’t allowed their happiness because there’s an evil woman trying to break them up. But the blurb is really not important at this point. The execution is.

Because it’s not the storyline as such that makes this such a terrible read. Even a silly storyline can be awesome if told by a talented writer. No, it’s the complete lack of writing skill, inability to master the english language and also that minor detail of not actually possessing the gift of storytelling. The obvious “I’m writing about something I don’t know about” doesn’t help matters either.

I could close my eyes, scroll through Double Teamed and point my finger at random and I’ll be touching complete and utter shite every time. Usually there’s something redeemable about any book. Usually there’s some aspect of a story that’s fine even if the final composition isn’t a 5-star. But this book has nothing. Not a single thing. 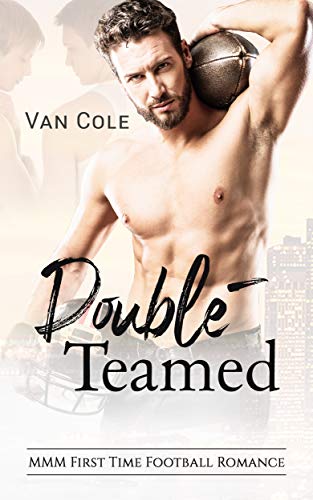 The most minor thing, in my opinion, but the thing that is so very telling about an author, are all the spelling errors, switched around words and general grammatical jumble. Those things are annoying and it’s obvious Double Teamed wasn’t proof read, but I can look past such things for a good story. Meaning I can’t look past them at all in this book. So if you don’t want to read a book with adult content written in the style of a 5th grader, don’t read this book.

This is a story with a threeway. It’s a short read focusing entirely on the interactions and relations between the main characters. I was counting on some quality shagging and sexytimes. And yes, there was definitely some nudy scenes. They were far from sexy though. Since the writing is so poor, it’s hard to say if it’s the writing itself that’s the problem or if the robotic description of random licking, slapping and sucking on bodyparts is due to lack of understanding of human sexual relations. There’s a little something called arousal. If an author can’t convince the readers that their characters feel that, then stay the hell away from smut-writing. And also, I get that it’s more difficult to describe three people getting it on than it is describing two. But for fuck’s sake. What’s the point of smut if you’re unable to tell who’s doing what with whom and where? And most importantly, there is absolutely no point in describing the nasty if it’s just robotic, repetitive motion. So, if you prefer to read smut that’s actually hot, don’t read this book.

Now, about the storytelling. If it wasn’t for the shenanigans, I’d say this is exactly the type of writing that english teachers in elementary schools encounter on a daily basis when grading homework. It sucks. The POV jumps around even though the entire story is told from Adam’s point of view. Everything is exaggerated and/or implausible. The characters feel as real and three-dimensional as paper cutouts. The “plot” is so infantile it would be funny if only I hadn’t actually paid for this book. Also, it’s painfully clear that Van Cole hasn’t done any research. If you write about stuff you don’t know, it shines through. Always. Adam’s supposedly a lawyer. He’s described as wanting to be a “correct” lawyer. Cole’s description of Adam’s lawyer-ly job is “signing those papers and replying emails”. Wow. So, if you don’t want a story with the feel of being written by your average 10 year-old, don’t read this book.

I could go on. But I think I’ve made my point.