This is a bi-awakening read that will melt your heart and and warm your insides. In a good way.

Up until previously I actually avoided books by Riley Hart. And now, I’m kicking myself over that fact. I mean, Hart’s books are always highly rated on vendor-sites and are recommended on all the book forums. But somehow, I had gotten it into my head that her stories were always sickly sweet, low-angst and without any drama. Which I equated to boring. I still don’t know if my preconceived idea of Hart’s books always being sweet, low-angst stories is true or not since Hard Knox was both of those things. But it was also anything but boring. 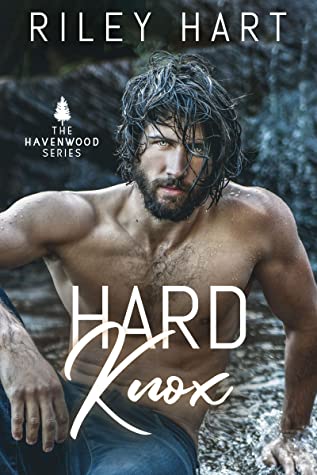 The entire read, I just had this happy, warm feeling in my chest. I don’t know how Hart managed it, but from page one it was like stepping into a feel-good universe inhabited by the most endearing characters. It was insta-love on my end.

Synopsis: After finding out his boyfriend is a serial-cheater, Callum moves away to the little town of Havenwood. There, on his first night in town, he meets a gorgeous guy – Knox – who’s like a lumberjack wet dream. Knox is also straight and a divorced father of two. But there’s an undeniable bond between them and they soon become friends. Callum is attracted to Knox, but treasures their growing friendship. However, Knox’s feelings evolves into something more. But does he dare act on his feelings? And how will his kids react to their father coming out as bisexual?

Both Callum and Knox charmed me from the start. Callum is outgoing and spunky but hides his insecurities and hurt. Knox has a heart of gold and would do anything for his kids. He’s also a man of few words who tries to get better at expressing his feelings. Callum and Knox is that unlikely pairing that is just perfect together. These two opposites found each other immediately, though in a platonic way at first. And I think that what made this read so utterly endearing was how naturally and comfortably they fitted together. They became friends first, and then that friendship evolved organically into more. It was lovely. Just beautiful writing.

I devoured this story. Despite the sweetness and lack of high-level trouble. Hard Knox captivated me. And I was so emotionally invested in Callum and Knox it’s not even funny. Just the very low-key drama of Knox’s daughter not accepting Callum in Knox’s life had me almost in tears.

So I can only say that I’m in awe of Hart’s writing and storytelling talent. This is the sweetest, most organic and convincing lovestory I’ve read in a long time. I can’t recommend it enough.