So, I’m on somewhat of a Josh Lanyon trip right now. Like in the sense that I’ve been bingeing her work, series by series. Because her stories are frankly addicting and I just adore them.

What’s weird is that I’m never really enticed by the blurbs to her books, but I’ve learned by now that that doesn’t matter. Because so far I’ve loved everything I’ve read.

Cosmo Saville is a witch. He’s also about to get married to a non witch who’s completely unaware of the existence of magic. But when Cosmo happens to stumble upon a dead body, he becomes the prime suspect of murder. Which is very inconvenient. Not only because of the need to keep the magic community a secret, but also because Cosmo’s intended is no other than the Police Commissioner himself, John Galbraith. So Cosmo needs to find the real killer while also keeping a low profile so as not to scare away his soon-to-be husband. 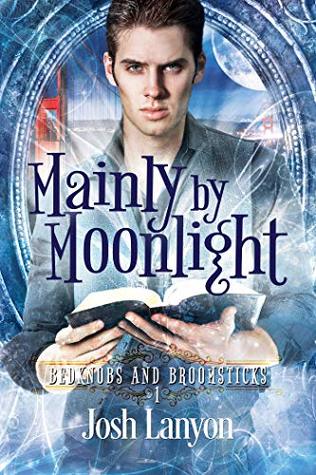 As with many of Lanyon’s stories (that I’ve read so far), the main character pair consists of a younger, outgoing and positive guy (Cosmo in this case) and an older, grumpier one (John). Maybe I’m a bit single minded, but I really love that dynamic. Cosmo is not exactly flamboyant but definitely eccentric, and unapologetically himself. He’s simply a fabulous character and instantly lovable. Then there’s the buttoned-up John who has a military background and quite rigid morals and ideas. And despite John being hardened by his time in the service, and being capable of cruelty, I was so bloody invested in Cosmo’s and John’s happiness one would think they were real people.

This story is not meant to read as a stand-alone. This is the start of a series (and yes, I’ve already finished the second installment, I Buried a Witch) and the plot isn’t even close to being resolved by the end of book one. There’s a HFN ending (thankfully), but there’s no point in starting in on it if you don’t want to commit to the sequels. And even though there’s an underlying plot involving murder and secret societies, the main attraction is without a doubt the relationship between Cosmo and John – which has a rocky start for sure. So it’s a love story with a bit of mystery on the side, in a contemporary yet magical world. And those are definitely the proportions I prefer.

I really, really, really recommend this book. And this series. Unfortunately, the third installment wont be out until next year. But I’m sure it will be worth the wait.