Sensation Fantasies 3 is the newest release in a supposedly hot and steamy series by Kimberly Knight. I write ‘supposedly’ because this was probably the least steam I’ve encountered in a book that claims to be all about the sexytimes. Don’t get me wrong, there were nudy scenes. There were different constellations of body parts connecting with other body parts. But it was all so technical, without feeling. So, a great big dud really.

There are three books in the series and the same blurb is used for all three (I suppose that should have been a warning sign). It goes on about a highly exclusive and secret sex club, Sensation, and what goes on there. The only difference between the three blurbs is that you get to know which couple get it off in which book. No. 3 is an M/M lovestory. Vaughn, a lead guitarist in a band about to make it big, meets Slate, a professional baseball player. 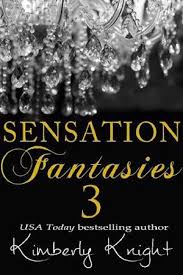 I understand that it’s really hard to cram a credible love-story in such a short book. But unfortunately, it’s not only the lack of emotion and sizzle that drags this read down, it’s the entire thing. I have seldom read a story with such 1-dimensional characters, they’re like paper cut-outs. Honestly, the only thing good about it is it’s length. It was short.

And yet, Sensation Fantasies 3 gets absolutely sensational (!) ratings on GoodReads and BokBub. I can only assume that the rating system is rigged. No actual living, breathing human with human emotion could possibly enjoy the robotics going on in it. Or. The fenomenal ratings could mean that our robot overlords have arrived already. I would have hoped for at least a few more generations of freedom for humanity before we were usurped, but you don’t always get what you want, right?