Shots on Goal is another hockey romance. It’s of the M/M, jock-meets-nerd variety – which I love. And I thought I knew exactly what I’d be getting with this read. I chose it more or less as a comfort read; a familiar storyline of closeted athlete meets out-and-proud, sprinkled with angst and sexytimes followed by a happily ever after. And in a sense, that is the gist of the story, but it was a bit more than that.

This is actually the third installment in the Stick Side series. And no, I haven’t read the two previous ones. Shots on Goal works as a stand-alone. Though I must admit, in the beginning it was a bit of a challenge to keep some of the names and characters straight – even though they weren’t (Sorry, couldn’t help myself there). 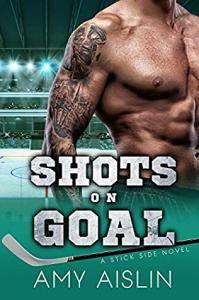 Anyway. Shots on Goal is about Roman, an NHL player who’s learned the hard way not to trust anyone, and Cody, a Physcology major with a love of books. Despite Roman’s grumpy and standoffish demeanor, Cody sees past Roman’s defences to the man beneath. And Roman, despite his fear of betrayal, can’t seem to stay away from the passionate, lively Cody. There’s only those minor inconveniances of closets, ghosts from the past and potentially bigoted teammates to overcome.

This is a true slow-burn romance. So, if you’re looking for fast and furious, look elsewhere. The tentative development of Roman’s and Cody’s relationship is slow going. They become friends, long before they become anything more. But the portrayal of Roman’s struggle to trust again, Cody’s insecurities and their gradual, growing affection is totally engaging.

After a very heartbreaking prologue, I had a bit of trouble getting into the story though. The slow pace took some getting used to. But I’m so glad I stuck it out. Because I really liked this read. I hadn’t meant to pick up such a romance-y romance, but I’m so glad I did. It’s beautiful and so well written. And there’s a hopeful undertone throughout the story implying that no, humanity might not be a totally fucked up race after all. Also, my very heterosexual, ignorant self got a bit educated which is also a bonus. I hadn’t heard the term demisexual before and I most certainly didn’t know what it meant. I do now though. 🙂