This is a cute and whimsical read. It’s lighthearted entertainment with a fresh angle on the shifter genre. And I enjoyed it quite a bit.

Blurb: There’s a nerdy paleontologist, Simon, who’s working on a fossil a certain cartel collector is set on stealing. When cartel goons are about to grab both Simon and the fossil, a guy with a bat and a pink mohawk shows up and saves both. While kicking some cartel ass. What started as a regular work day for Simon ends up with him setting out on a road trip across the country with a total stranger, albeit a good looking one. Dalton – Simon’s savior – is weird, charming and hot. And he can turn into a dinosaur. 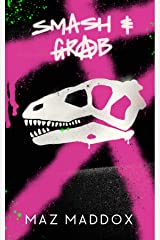 This is a fun story and definitely my first dinosaur shifter read. It’s well-written, but the storyline would need some more work. Sure, the story isn’t meant to be plausible but, dinosaur shifters aside, it would have been nice if the rest of the plot had been slightly more believable.

As for the characters, both Simon and Dalton were endearing in their own way. Also, they couldn’t have been more dissimilar. Opposites may attract according to some, but I wasn’t actually convinced of their attraction to each other. I couldn’t feel the spark. And with Simon’s somewhat square personality, it grated how easily Dalton convinced Simon that a road trip to Dallas was the solution to his cartel-problem.

Smash & Grab is a short read. Really short. So despite the cuteness, despite the delightful whimsy, there’s no room for either character or plot development. The storyline’s straight as an arrow with no surprises. So as cute and fun that it is, Smash & Grab isn’t particularly memorable.

It’s perfect if you want a couple of hours of distraction and some laughs though.