Well, eff me sideways, I wasn’t expecting this!

The blurb did in no way prepare me for the awesomeness that is The Lightning-Struck Heart. It was the reviews, the never-ending recommendations and the author that made me click on the Buy now button. That and the credit on my Audible account. Because I’ve been listening my way through this kick-ass story.

I don’t tend to gush. But some stories frankly deserve gushing, and this is undoubtedly one of them.

However, I wasn’t immediately sucked into the story. Klune’s writing-style takes some getting used to and during the first chapter I was also wondering if I’d accidentally started listening to one of the sequels. But holy frak, soon I couldn’t make myself turn it off. I’ve neglected my family and lost serious sleep over this audio-book.

This is a fantasy, slow-burn, M/M romance. There are wizards, both good and bad, fairies and dragons, castles and swoon-y knights. And it most certainly isn’t a childrens’ book since it’s pretty much sexual pun heaven. 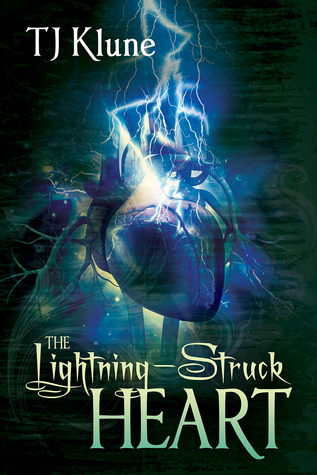 The book follows Sam, a wizard’s apprentice who tends to be kidnapped a lot, in his different endeavors. By his side, he has his two best friends; the horn-less, gay, unicorn, Gary, and the half-giant, Tiggy. Sam has a humongous crush on the castle knight Ryan Foxheart. Unfortunately, Ryan’s dating the despicable Prince Justin. But when the prince is kidnapped and Sam and Ryan are sent to rescue him, it turns out that Ryan perhaps isn’t as indifferent to Sam as he thought.

I can’t recommend this book enough. Just like the other Klune stories I’ve read, The Lightning-Struck Heart is hilarious. Hilarious! Snort-laughing kind of hilarious. So if you don’t want to come off as a loon, you might want to avoid reading or listening to it in public. Sam is the epitome of sass and snark. He’s one of the funniest and most lovable characters I’ve ever come across. And his side-kick, Gary (the horn-less, gay, unicorn. How does Klune come up with these things!?!), and their banter is pretty much priceless. The story is told in large part through dialogue and the inner monologue of Sam which makes fast work of getting to know and fall in love with him. So yes, the story is very much character-driven which is my favourite kind of story. To me, the love of the characters and the awkwardly charming interactions between Sam and Ryan were the main reasons I couldn’t seem to turn the audio-book off. There is of course a perfectly fine storyline involving the quest to save prince Justin, but to me, that’s secondary.

But I couldn’t possibly write this review without mentioning the spectacular job the narrator Michael Lesley does. I usually prefer reading for myself, but I would be seriously missing out if I hadn’t chosen the audio-version. He’s fabulous. Just fabulous.

You should read it. Or listen to it. Because then you’ll be gushing too.